In the Future, We'll All Have 15 Minutes of Privacy 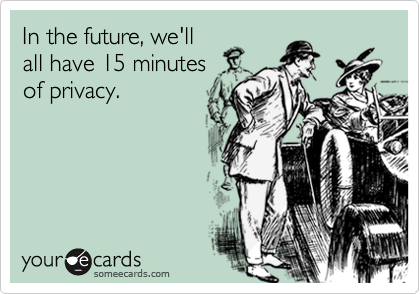 Taking my inspiration from Andy Warhol (who famously said "In the future, everyone will be world-famous for 15 minutes"), I first used the above phrase two years ago at a Streaming East Conference, where I was on a panel with Steve Garfield and Sarah Austin. It seems more relevant now than ever, thanks to some developments last week that touched on the concept of privacy.


First, at the f8 conference in San Francisco (where we were lucky enough to be able to bring a mobile app-enabled Ford Fiesta), Facebook CEO Mark Zuckerberg gave a keynote address that brought a significant amount of attention to Facebook. And rightly so: Zuckerberg prefaced it with the remark that it would be "one of the most transformative things for the Web we've ever done." So what was it?

Basically, the notion is that Facebook would bring the Open Graph to the web - enabling friends to see what each other are doing, reading, sharing, liking, etc. not only on Facebook, but across the entire web. Every site you visit will have the potential to be "Facebook-ized" and share your actions with your network of friends. Pretty cool, on the face of it - you'll be able to get a lot more insight into your friends' habits in a single place (such as where they're checking in via Yelp, the music they're listening to on Pandora, or the articles they're reading on CNN). It's personalization at its most sublime.

But on second blush, that's a LOT of data that people have the potential to share, without realizing what it means to their privacy. The users that don't take the time to understand the full impact here might end up being sorry later. Oh, and did I mention that the feature is turned on by default? This is a little reminiscent with what Facebook encountered with Beacon in 2007/8 or what Google Buzz just ran into.

What You Need to Know About the Facebook Changes
I've got a link roundup here, with a little context to help you make the most of it.

First, you can watch the keynote on Facebook's official site.

Next, please be sure to familiarize yourself with Bobbi Newman's writeup over at Librarian by Day that noted you have to opt out of the setting. If you'd like to do that, you can:
1. Go to your to your privacy settings --> Applications and Websites and uncheck box at the bottom.
2. Then click on the links to Yelp, Pandora and MicrosoftDocs.om on Facebook and click on “Block Application”

Mashable wrote about Facebook's Open Graph: What it Means for Privacy
One of their most important takeaways: "Public no longer means 'public on Facebook,' it means 'public in the Facebook ecosystem.'" - i.e., the Web. That's right. My old chestnut is more true than ever: whatever happens in Vegas stays on Google.


ReadWriteWeb has The Definitive Assessment for Publishers, Users and Competitors (and upon reading it, I agree - it is definitive)
Summary: For users, it's about privacy. For publishers, it's an opportunity to make your content sociable, ratable and part of a pseudo-CRM system. And competitors are essentially on notice to collaborate or die.

And if those didn't answer your questions, GigaOm has Your Mom's Guide to Those Facebook Changes.

UPDATE (May 11, 2010): from the New York Times, Facebook Executive Answers Reader Questions
And the NY Times offers a helpful graphic to help you make sense of the changes.

Another Blip on the Radar
As if Facebook's announcement didn't send enough of a shockwave through the privacy ecosystem, Friday brought another concern. Blippy, a social sharing site that lets friends know what you purchased, screwed up royally when they released some credit card numbers of members. The full credit card numbers that Blippy members used to make purchases were visible via a Google search.

Blippy then went on to explain exactly how it is that something like that could have happened. But the damage was already done. While they may not have lost a ton of customers, there may be a good number of them who'll simply never return. And Blippy's tepid response to the crisis, was slow and lacking in empathy; their original blog post on Friday, April 23 (which has since been changed, I might add - tsk, tsk) stated: "While it looks super-scary and certainly sucks for those few people who were affected, and is embarrassing to us, it's a lot less bad than it looks." They updated their stance as of Monday the 26th, but as I said, it may be too late for them already.


So that's the last week in privacy. If you don't mind sharing your identity, feel free to jump in with a comment on your thoughts on the latest developments.
Posted by Scott Monty
Labels: crisis, facebook, news, trends
at 2:01 AM