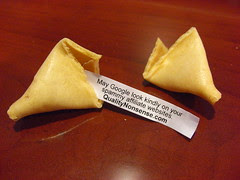 The spam and other unsolicited DMs I've been getting on Twitter have finally gotten to me. And I'm going to be taking action.
A Bit of Background
You know the kind of direct messages I'm talking about, all with spammy links in them:
"Is this you on here?"
"I just gave you a High Five! Check it out"
"Hey, I got some free ringtones from here"
"Hey, can you take this quiz thingy?"
"I found out my IQ. You should too."
"I lost a bunch of weight doing this."
And many, many more.
Lots of the direct messages I get are of the automated sort when people first start following me. Having been someone who used to do that - mainly to let people know how I preferred to communicate - I can understand the need to do that. But what I've been seeing lately is out of control. It's gotten to the point where these disruptive DMs have crippled my ability to monitor and respond to legitimate direct messages. I'm spending more time deleting or ignoring messages, at the risk of missing messages from people I want to hear from.
Reciprocity
For a long time, I've believed that when someone follows me on Twitter, it's common courtesy to follow them back. What I have to say shouldn't be any more important than what anyone else has to say - that's one of the great features of social networks: true democracy at work. I realize that this isn't everyone's style, but it's been something I consciously chose to do.
A tool I've used pretty successfully to manage this (rather than eat up my time manually following people back) has been SocialOomph, which was previously known as TweetLater. It allows you to automatically follow (and unfollow) people back, among other nifty features.
But lately, my Twitter stream as well as my direct message inbox has been polluted with spammy posts. The recent addition of Twitter lists, which have allowed me to begin to categorize some of the people I follow, has been helpful - you can check mine out here - but I'm finding it's not enough.
No More
I've decided that from now on, I can no longer afford to follow people back automatically, so I'm suspending that feature from my SocialOomph account. If you wish to be followed by me, you'll have to request it and I'll have to ensure that what you're saying provides value to me.
In addition, I'm going to be unfollowing anyone who spams me with these Facebook-like apps that send automated direct messages or anyone who DMs or @s me their latest money-making schemes.
I haven't gotten to the point where I'm purging and rebuilding my Twitter followers, nor do I feel like I need to go that extreme thanks to the addition of lists, but if this level of spammy behavior keeps up, I may have to revisit that decision.
I suppose this is a natural extension of a service or platform going mainstream. But for those who use Twitter for more meaningful connections and communications, it's frustrating. I hope that Twitter management has a plan to try to minimize this.
Update: reader Andy Michaels notes that SocialOomph has an opt-out service that takes care of automated DMs.
Image credit: Chris Pirillo (Flickr)
Posted by Scott Monty
Labels: news, trends, Twitter
at 9:07 AM