I originally wrote this over a year ago, but I think it deserves another go around, as there seem to be even more social media "experts" out there. Please add your suggestion to the comments section or on Twitter with the hashtag #smbulb and let's see how many responses we can get. 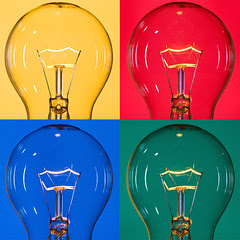 Stop me if you've heard this.
Yesterday, I asked a question on Twitter - one that Joseph Jaffe rhetorically asked on his blog - I posed it as a joke and asked for responses.
The question was: How many social media experts does it take to change a lightbulb? My original answer on Joe's blog was: "309. One to come up with the idea, three to turn it into a strategy, five to execute it, and 300 to influence someone else to do it."
Naturally, responses to my question were far better than my lame punchline. Here are some examples of what I received:

@mncahill: 14,465 to twitter about the need for "LightBulbCamp" and one to hire a developer to change it.
@scottaparks: None, it never gets changed. They are too busy looking for a better bulb!
@cohnjoyne: before I tell you how many soc media experts it takes to screw in a light bulb, full disclosure, GE is a client of mine
@adam_rosenberg: at least 10. that way you have 1 to change it and at least 9 to tweet about it.
@scottstead: A: 500, Chris Brogan to ask the question, 495 to respond, 3 to organize #changealightbulbweek08, 1 to change the lightbulb
@ScottWitsToo: 3. One to change bulb. Two to discuss how we could change light bulbs better if only we could talk ad nauseum about the process
@LewisG: At least two, so an argument over the ethics of monetization can occur.
@jtobin: A team of 6 will happily consult, but nobody actually wants to execute the light bulb change for you. :-)
And this one from @jeffglasson: 4, Mitch Joel to give 6 steps to open the package, Brogan to write a 100 blog post series on the process, L. Feldman to score the puppet adaptation, and CC Chapman to actually screw the lightbulb in and get the job done!
My favorite was from @dmscott: What's your budget?

Posted via web from The Full Monty
Posted by Scott Monty
Labels: social media
at 12:21 PM