Fear and Loathing in Social Media 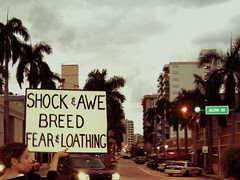 You would think at this point that we'd be up to curiosity or even playful experimentation.
But it seems that, according to the e-tailing group and PowerReviews' survey earlier this month that brands are still hesitant to entirely give over to the power of social media for fear of (what else?) loss of control of their brand and concerns about their competence. A secondary fear is that consumers might find social sites more engaging than the brands' sites, and therefore stop visiting the brands'
sites.
I may be oversimplifying this a bit, but if I were at a brand that was concerned customers might leave my site for a better site I might, oh, I don't know...maybe BUILD A MORE ENGAGING SITE?!?!?!

That's only a start. Another course is to engage with consumers where they want to be reached. When the surveyed companies state that their goals of using social media are: to increase engagement, build brand loyalty, and spur word of mouth. If that's the case, you don't get there by (a) ignoring where the rest of the world is going; or (b) burying your head in the sand in terms of these sites.
The good news is that half of the suggested activities/sites mentioned in the survey (Facebook page, Twitter, customer reviews, blogs and viral [sic] videos) are already accepted or used by more than half of the respondents. That's a great start, but there's more potential.
Before I make a recommendation, I'd like to review a crude approximation that I've been working on - it's how some brands and agencies approach social media with trepidation. Because it's not unlike how humans deal with grief, I've developed a similar model for marketers:
The 5 Stages of Social Media Grief
(With apologies to Elisabeth Kübler-Ross.)

As we know in dealing with emotional grief, you can't skip steps - you have to go through them. Some folks may be stubborn and may take a while, while others may be ahead of the curve and breeze through them quickly. [Aside: in 2004, when I heard Elisabeth Kubler-Ross died, my grieving went as follows: "No that can't be true. Curse you, Lord, no just God would take her from us. I wish she was back. Geez, life stinks. Oh, well, that's the circle of life."].
Now, in order to address those fears and to get on with the acceptance, why not start by aligning your social media activities with your business plan and your overall marketing and communications objectives? A second step would be to listen, listen and listen - get a sense as to what's being said about your brand and how people engage on these social platforms.
And then if you'd like to make a more engaging site for customers, consider integrating or aggregating content from third party social sites or services right there on your own web page. Give people a chance to find contextually relevant material from other sources on your site. We've done it on the Fiesta Movement site and we continue to do it in a variety of ways on The Ford Story.
The thinking there is that people will go out and search for other peoples' opinions on your products anyway. Why not give them something contextually relevant while they're on your site and provide value? It's an acknowledgment - dare I say acceptance? - that the world around us is changing.
Photo credit: tavopp on Flickr
Chart credit: eMarketer
Posted by Scott Monty
Labels: enterprise, social media, strategy
at 2:14 AM