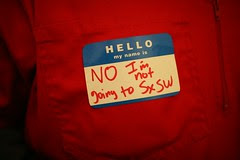 One of the great features of the South by Southwest Interactive conference (that's SXSWi to you) is the plethora of panels and speakers there are to hear from. In many cases, you have to make hard choices because of an embarrassment of riches, so to speak.

If you've never gone to SXSW, I strongly recommend it, whether you're learning about social media or you're a representative for your company in the field. You'll meet plenty of other talented and like-minded individuals, you'll see new technology debuted (it's where Twitter first made a big splash), and you'll be able to hear some industry thought leaders. Not to mention you'll have a chance to keep Austin weird. If you can only attend one social media conference a year, make it this one.

Each year, the organizers of SXSW open it up to us plebs to select which panels we'd most like to see. Never one to say no, I've been asked by five different individuals to be part of their panels. Here they are. Feel free to vote for (or against) as many as you like.


But be kind. I'd like a chance to see some panels as well. ;-) And while you're at it, take a look around the Interactive Panel Picker and select some others. There are plenty to choose from.

Posted via web from The Full Monty