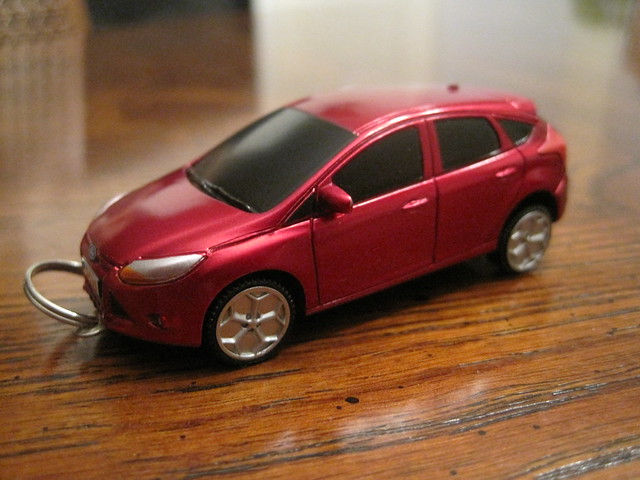 Today marks exactly one year since I joined Ford Motor Company to head up social media efforts. You'd be surprised at how much has happened in such a short period of time.

The last year has marked some of the most turbulent not only in our economy overall, but in the entire history of the global automotive market. Since last December alone, we've witnessed bankruptcies filed, quarterly and annual losses not seen in decades (if ever), and emergency government support of some of our most iconic brands.

And I decided to move my family to Michigan just before it all began. Exciting times, huh?

I've written occasionally here about my Ford experiences, wanting to keep this blog as wide-ranging as possible for my readers. But more than a few people have asked to hear a little more about some of our activities. I thought my one year anniversary was the appropriate time to reflect on what's happened during that time.

This is the first part of a multi-part series - and it's rather long. I beg your indulgence.

The Beginning
I announced my intention to join Ford a little over a year ago. In re-reading that post, I notice that I spent time thinking about what I was leaving behind rather than what was in front of me, which in retrospect (do you sense the irony?) didn't really give much of an impression of what lay before me. The job opportunity with Ford was pretty exciting - running social media for a Fortune 10 company and an American and global icon. Enough to get any social media strategist excited, right? Well, the notion of moving to Detroit didn't really sit well with me (chalk it up to an East coast elitism) and I wasn't totally convinced.

It wasn't until I started doing my research and understanding where the company was headed that I started seriously considering it. After all, the company turned a profit in April 2008 - a year ahead of Alan Mulally's plan to turn the company profitable, and based on the product lineup I saw, this wasn't the Ford that I assumed I knew. Cool designs, interiors that rivaled foreign brands, hybrid technology, and an engine in the works that would boost fuel efficiency across almost the whole fleet - not to mention a commitment to being leaders in digital communications - this is the Ford I discovered. And when I paid a visit to the company, every person I met - every person - was intelligent, dedicated and passionate about Ford.

In short, my perceptions were the only thing holding me back - something that Detroit and Ford experience on a daily basis. And - now that I've lived here for a year - I can say my long-held perceptions were incorrect.

Early Progress
Typically when a leader assumes a new role, he or she is judged based on how much they accomplish in the first 30, 60, or 90 days. And I knew that our lofty goal at Ford - to be become a leader in digital communications in four years and to become the world's leading social automotive brand - was one that would require a lot of teamwork. So, I quickly set out to meet as many people as I could, understand the processes in place, and start to work on our social media strategy.

I should mention that in addition to my social media responsibilities (my title is officially Digital & Multimedia Communications Manager), I also manage a team of people who are responsible for our TV & radio broadcast coverage, as well as our digital publishing team that maintains our Media site, among others. These teams really do a great job in keeping Ford in the spotlight. [I should note that I lost the only social media person on my team last August and still haven't replaced her - that's about to be rectified.]

Some of the assets that we had at our disposal early on included:
The early results were impressive: SMPR material used in over 5,000 posts and articles, Flickr photos viewed over 120,000 times, and over 500 subscribers on the YouTube channel with over 1.2 million views of 140 videos.

While we were fine-tuning the strategy (and I had a pretty good instinct as to what it was going to look like), we expanded our presence: we developed a number of Twitter feeds (@Ford, @FordDriveGreen, @FordMustang, @FordCustService, to name a few), we got more active on Facebook, and we interacted on blogs. These activities were intentional, for I knew as an outsider to the industry that Ford didn't have a face to the general public and we needed to begin humanizing the company by getting faces out from behind the Blue Oval. I went so far as to leverage my own personal brand - not because it was convenient, but because I believed so firmly in the direction of the company, and because that's the network I had build up before I came to Ford. It seemed natural to extend it.

Twitter made a lot of sense for Ford because it did a number of things for the company: it showed that we were listening; we were able to have 1:1 communication with consumers - but also in the very public setting that Twitter provides (i.e., everyone else is watching it happen); and it showed that Ford understood social media and was hip & cool.

As we developed the strategy, we spoke to people around the company, from managers to senior executives, in offices from all over the world. In the end, we realized we had to have a strategy that was flexible enough to:
Ultimately, Ford's social media strategy looked something like this:


Humanizing the company by connecting Ford employees with our stakeholders, allowing them to connect with each other when appropriate, and providing value in the process.

At about the same time that we created the strategy, the company was engaged in the hearings in Washington - not to ask for funding ourselves (Ford had wisely borrowed against its own assets some two years earlier) but to support the industry. We quickly found out that we were lumped in with our crosstown rivals, despite our intentions. I spent day and night defending our position on blogs, forums and on Twitter, until I finally created a post of my own to help the cause. We realized that a scattershot and one-off approach wasn't sustainable; a better solution had to be created.

So, in a massive flurry of activity and cross-departmental coordination, in the five days over Thanksgiving weekend, we created The Ford Story. It was a huge win for us, as it demonstrated the One Ford mission that drives the company, and it got a lot of coverage and attention for its design and good content. We wanted to ensure that we were true to our strategy, so we led with faces on every page - our executives speaking unscripted and plainly (albeit staged) about what Ford stood for. And because we had a number of documents to share - our comprehensive plan, a number of fact sheets - we decided to use an innovative site called Scribd for document sharing. And because we built it on WordPress, it resulted in an easy to understand and robust site that can be easily changed over time.

Since we seemed to be enjoying more media attention than before, I decided to have a little fun at an event I was attending with Alan Mulally. On a whim, I got a few moments of his time and took live questions via Twitter. However, just to show you that it's important to stay focused on what matters and to not get overly optimistic, during that time there was a little digital crisis communications effort that we had to deal with. I've covered that before - you can check it out here.

One bright spot, though: at the end of 2008, according to Vitrue's ranking of the 100 Most Social Brands, Ford managed to snag the #12 spot - the highest rank of any automaker on the list. It was safe to say that we were on our way.
Stay tuned for Part 2, in which I'll talk about some pitfalls along the way, our 2009 progress to date, as well as plans for the future.
Is there anything so far that I didn't cover you'd like to know?

You - and many others like you - make a difference every day. Thank you for being part of what inspires me.