Why Video Will Be So Important in 2009 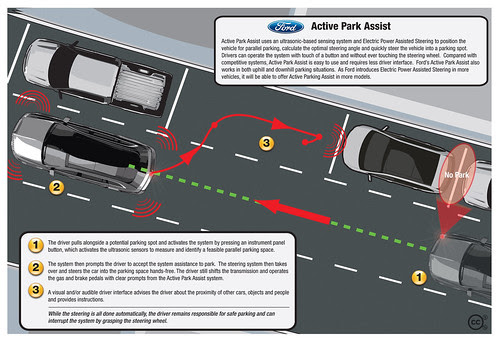 One of the principles that Web 2.0 affords us all is that, thanks to the ease of self-publishing, we can create content in pretty much any form we want. And if you don't know exactly how your customers like to consume information, I'd argue that you should make every version available.

This became pretty clear to me today, when we made an announcement at Ford that we're launching a new feature in the Lincoln MKS called Active Park Assist - which means you can parallel park hands-free. Sounds cool.

We launched a traditional press release along with a social media press release. There were mainstream online articles about it which got some pickup, including Engadget, the Wall Street Journal, and Yahoo. And the reaction was mostly people passing along the headlines on Twitter.

But it wasn't until we launched the video that we had that "a-ha" moment. People saw the technology in action and immediately understood what the text-based pieces and the image above were trying to convey.

In this case, we had a story that was more easily understood by observing how technology worked firsthand. When you couple an image-intensive story with an audience's need for quick information, video is a great solution.

So when it's time to make your own announcement, launch a campaign, or build awareness, you should ask yourself: what's the most effective way of telling your story?