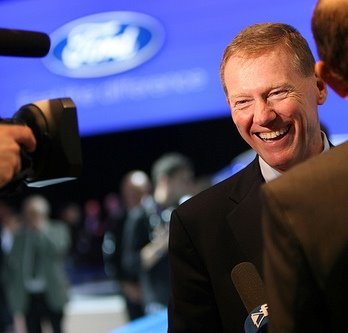 I was at a preview event that Ford was holding for media prior to the North American International Auto Show (NAIAS), when in strolled our CEO, Alan Mulally. He was immediately swarmed by journalists, who formed the traditional scrum.

When they dispersed, I got his attention and asked if he wanted to take some questions on Twitter. "What's Twitter?" he asked. Fair question. When I explained it to him briefly (and what I had been doing on Twitter recently), he was all for it.

[I've said before and I'll say it again: Alan Mulally is a down-to-earth, affable and smart guy who's interested in new technology and passionate about Ford. I'm proud to be serving with him.]

Here's a sampling of questions and answers from the exchange. Mind you, I was thumbing away on my Blackberry as Alan spoke.

@TWalk No. Matter of fact, we've accelerated the strategy with the safest most fuel-efficient vehicles ever. - Alan Mulally
— Scott Monty (@ScottMonty) December 16, 2008

@ScottMonty what is Mullaly's commitment to sustainability, both personal and professional?
— Asheen Phansey (@asheen) December 16, 2008

@ScottMonty yeah, what does it feel like to be LEADING the industry rather than sticking with the status quo?
— Tyler Hurst (@tdhurst) December 16, 2008

@idamaster Alan makes it a point to drive a diff vehicle every day - including the competition - b/c it's impt to understand cust's view
— Scott Monty (@ScottMonty) December 16, 2008

That closes this Q&A session with Ford CEO Alan Mulally. We may try this again some time.
— Scott Monty (@ScottMonty) December 16, 2008


Not bad for a first-timer. He was pretty succinct, too. What do you think? Is this an interesting way to connect directly to a Fortune 100 CEO?