As If You Really Wondered... 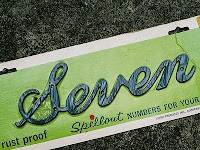 If there's one thing I'm not a fan of in the social web, it's the peer pressure surrounding memes. On the one hand, it's a forced post that I'd rather not write; then again, if I don't write it, I feel like I'm letting a friend down.

In this case, that friend was Aaron Strout, a social media and marketing colleague from back in Boston. Aaron has recently relocated to Austin (joining a number of other Boston illuminati) and is heading up marketing for Powered. And he told us seven things we may not know about him and challenged others.

So, here are the seven things you may not know about me (keep in mind I've done this a couple of times before). That means if you do your research, you'll know 23 things about me.


Now, in keeping with the rules of the game, I nominate these seven unsuspecting souls. These are all people whom I've met or interacted with for the first time throughout the course of 2008. It's my goal to break out of the echo chamber a bit and extend your reading, if you're not already aware of them:
Amber Naslund
Justin Levy
Samir Belwani
Bob Knorpp
David Alston
Matt McDonald
Shannon Paul

Posted by Scott Monty
Labels: fun, meme
at 7:27 AM