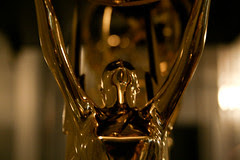 Pardon the expletive, but it's for a good cause. You see, Bud Light has won its first Emmy Award.

I received the following announcement via email:

The 60th Creative Arts Emmy® Awards were held this past weekend, and Bud Light’s "Swear Jar" received an Emmy Award for "Outstanding Commercial," marking the first time Anheuser-Busch has won an Emmy. The 60-second spot was created by DDB Chicago and directed by David Shane through Hungry Man.

I used Swear Jar as an example when I was debating the proper use of WOM vs. Viral. According to this version on YouTube, it's gotten about 3.5 million views. According to Anheuser-Busch Communications, the aggregate total is over 12 million. Not bad for Bud.tv.

(Incidentally, I believe that the difference is measured in the outcome, because you can't accurately predict virality.)

Here it is again for your enjoyment.


If you want to see what I have to say about the use of expletives in the marketplace, check out Watch Your Frickin' Mouth.