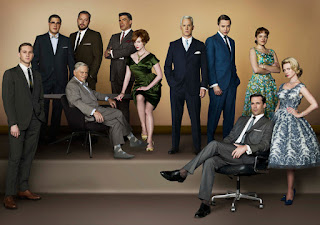 I've been a fan of Mad Men since the series premiered. The production values are amazing and the story lines are gripping, with some very complex characters. And I wrote about the unique advertising model that the show used, essentially making the ads relevant on a show about advertising in this day and age when we can skip right by commercials.

Back then, the show's blog was already in full swing; now it's even more so, with show highlights, previews and interaction with the various commenters. The categories that the authors are selecting fit right in with the show as well: 1960s Handbook helps we modernistas understand what life in the Kennedy era was like; Fashion File is a testament to both the cool styles of the early 'Sixties and the difficult and detailed work that the fashion designers perform for each episode.

There's also a very active forum, Mad Men Talk and a contest: the best impression of a character (by popular acclaim) wins a walk-on role on the show. And naturally, there's the long-standing Facebook group.

But now it looks like the show's marketing team has stepped up the game again by really jumping into the social media space. Mad Men - this show with such rich characters - is now on Twitter. Specifically, you'll find the following characters there, tweeting with each other and with you, if you "@" them:
Update (8/25/08): Also added to the roster are:
Their profiles link to www.sterlingcooperadvertising.com, which is a mirror for the show's site at www.amctv.com/originals/madmen.