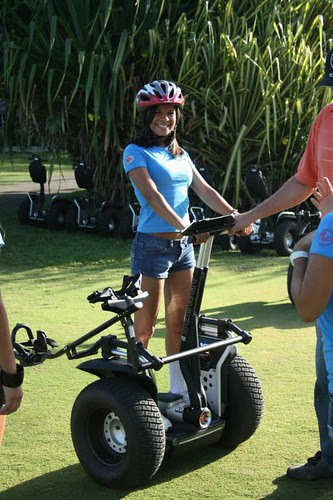 I've often said, "The last thing the world needs is another social network." And while I stand by that statement from a broad perspective (think Facebook, MySpace or Bebo), I think my advice can be ignored when it comes to an integrated, vertical approach to online communities. And I've got a perfect example.

The revolutionary two-wheel self-balancing vehicle was introduced in 2001 by inventor Dean Kamen to much acclaim. Since that time, there have been numerous ways that customers have either created their own or requested customized versions. So what better way to find out about some of these than to connect users with each other, so see what they're up to and how they use their Segways?

There are also sections that allow Segway users to share tips & tricks with each other in a wiki-like platform, and a calculator to see how you're saving the environment by not using a gas-powered vehicle. Naturally, you can create your own profile and participate in the message boards/forums as well.

The site has a really clean and fresh design and a logo that I really like. If you had to compare it to the product itself, I'd say it's a great fit - balanced, intuitive, and very cool.

My friends & colleagues at Plaid - the interactive agency that did such a stellar job with the My ooVoo Day With... site (ooVoo being a client of crayon, my employer) - designed the site for Segway. An interesting side note is how they actually got the business.

Last year, they took an appropriately designed van on tour across the eastern U.S. and called it Plaid Nation, stopping in at various locations, sometimes announced, sometimes unannounced. The stop at Segway headquarters in New Hampshire was not announced in advance, but the cold call, coupled with Plaid's ability to understand and navigate the social media space, was significantly impressive enough to convince the marketing team at Segway that Plaid was worth bringing on board. Wanna see how fun it is to work at Plaid? Check this out.

This year, Plaid Nation '08 kicks off on July 21 and is based on the west coast. I'm sure there are going to be some great tales from the road that they'll chronicle as they fulfill their mission of "spreading social media, one cheap motel at a time."

Hmm. I wonder if they'll be packing their office Segway in that van...
Posted by Scott Monty
Labels: communities, innovation, social media
at 3:35 AM