The father of social media, Rohit Bhargava at Influential Interactive Marketing has started a Writeboard exercise on blogging etiquette, called The Golden Rules of Blog Etiquette. 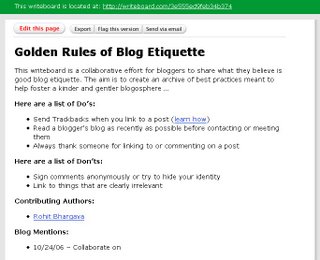 As the blogosphere is rapidly expanding and changing, it's important to recognize that there are many new contributors and readers out there, and that there are no standardized protocols for handling blog-to-blog interaction. Which is why Rohit started the Writeboard.

Really, most of what is written (and what I imagine will be contributed) should be common sense. After all, social media is an extension of social interaction. Similar rules of etiquette should be followed as in "real life."

It's an open forum, so anyone can contribute. Find it at:
The Golden Rules of Etiquette (http://123.writeboard.com/3e555ed9feb34b374)
Password: begood