A couple of interesting developments related to YouTube. First, a new site called Viral Video Chart tracks the most talked-about videos on YouTube (thanks to Micro Persuasion for the link).

Coming in at #11 is New Numa, a video by Gary Brolsma, the original Numa Numa kid (*see below for details on Numa Numa). Here's the interesting part of New Numa: with this video, Gary is challenging viewers to participate in a contest to vie for $25,000 in grand prize money for the best video. 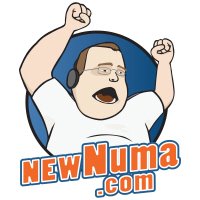 Since the posting of the video on September 8, 2006 (one week ago!), it has had over 1.6 million views - plus it's helpful to know on YouTube that others can rip your video and repost it under a diferent title, so the views may be significantly higher. "New Numa" (Gary's YouTube name) has nearly 1,200 subscribers and the video itself has encouraged nearly 20,000 comments.

The New Numa has its own Web site, on which Gary is immortalized in a logo. Once there, you can download ringtones, buy Numa Numa gear, chat with Gary, get the music from iTunes, and read a press release from Jaeter Corporation, the new media company that is hitching its wagon to Gary's star.

It used to be that star personalities sprung from campaigns (think Jared, Mr. Whipple, etc.). Now media companies are taking advantage of individuals' 15 minutes of fame and trying to create a larger sensation out of it. What fame-seeking shlub can turn that down?

For the two of you of you not familiar with the original Numa Numa, here it is. Gary Brolsma had recorded this on his Webcam and sent it to a friend. Ever the pal, his friend uploaded it to the Internet and a star was born.

If you ask me, the original is much better than the new also-ran. Plus, I like the logo.
Posted by Scott Monty
Labels: Friday Fun, Video, Viral
at 5:21 PM