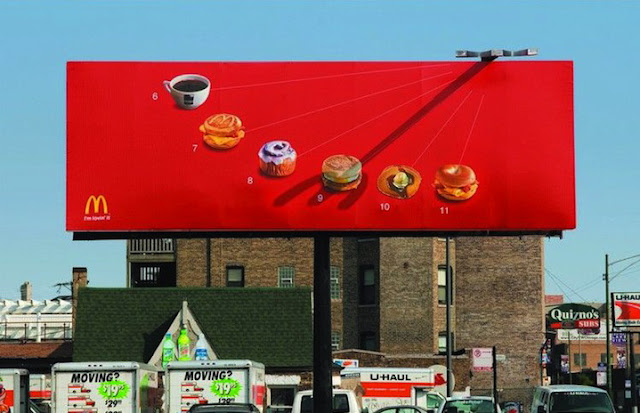 Sometimes it pays to get back to the basics.

In Street Stunts on the Digital Highway, BusinessWeek reports that McDonald's didn't see much movement in its breakfast business from TV, radio and newspaper ads in the Chicago. What caused the most buzz? A billboard.

But not just any billboard. A fully-engineered sundial that suggested which McDonald's foods you might want at a certain time of the day.


But Leo Burnett didn't stop there. They sent this photo to Chicagobusiness.com, a regional portal, where it was visited 105,000 times in two weeks and from where it richocheted around the blogosphere.


"With a clever idea and a few thousand dollars, brand managers are able to harness the power of blogs, video and photo-sharing sites like YouTube and Flickr, thanks to millions of people roaming the streets with camera phones."


It's a basic concept that takes advantage of the newest technologies. Sometimes we need to remind ourselves to remove the Web 2.0-colored glasses and just squint a little bit.